Adjacent is a watercolour of Saint Mary's Cathedral precinct around the year 1836. The dirt track running from left to right in the foreground would become Saint Mary's Road. In the background the largest building is old Saint Mary's, commenced in 1821 and which had become Archbishop Polding's Cathedral in 1835. This view shews the rear of the Cathedral, including one of its transepts, facing north.

Four other buildings are depicted in this watercolour. At the left is a school, on the right, a residence for clergy. Another residence, with a small verandah,  is in the centre, although it is not clear in which of these buildings the Archbishop lived.

Hiding between the two residences is a two-storey building, which was Saint Joseph's chapel. Because Saint Mary's took so long to build, a temporary chapel was built for the needs of the faithful. Saint Joseph's chapel continued to be used long after the Cathedral was complete. It is probable that this collection of buildings was demolished when work on the new Cathedral commenced in 1868.

By courtesy of the Latin Mass Society of Australia * we are able to share a brief video presentation of the Office of Tenebrae for Maundy Thursday celebrated in the Church of Saint Thomas Becket, Lewisham (Archdiocese of Sydney).

The videographer was able to capture the newly-decorated walls of Saint Thomas', completed in December according to a design prepared by the Saint Bede Studio.  Further posts about Saint Thomas' church appear below.

The Guild of Saint Thomas the Martyr of Canterbury sang this Tenebrae office and are recorded singing a polyphonic setting of one of the Responsories.

The Old Church of Saint Thomas (1851)
Restoration of a Landmark Sydney Church : 5

This rare image is reproduced from a glass plate negative in the collection of the NSW State Archives.  It was taken on the railway lines running eastward from Summer Hill towards Petersham in 1885 or 1886. 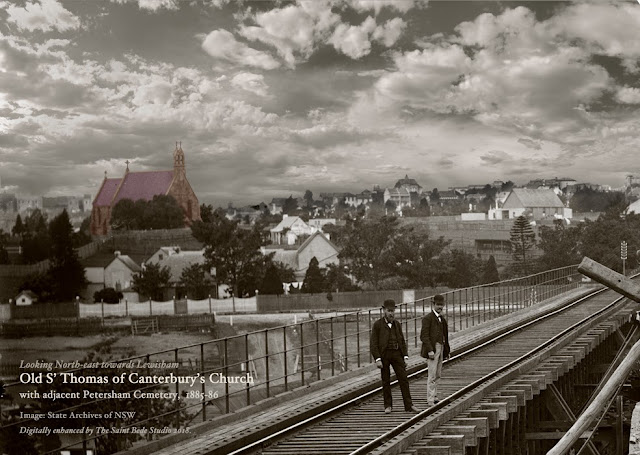 A section of the image was discovered to depict the old church of Saint Thomas of Canterbury (founded 1851) and the adjacent Catholic cemetery.  The cemetery, as shewn in this photograph, extended from the church fully to the righthand side of the image.  It is believed that almost 4000 burials took place in the cemetery, but all of the graves were relocated in the first 40 years of the twentieth century.

The image was digitally enhanced by The Saint Bede Studio.

Click on the image for an enlarged view.
Posted by The Saint Bede Studio at 11:18 pm

Restoration of a Landmark Sydney Church
Re-decoration of the Chancel :1

As part of our series of posts on the refurbishment of Saint Thomas of Canterbury's church, Lewisham, we are pleased to include these two photographs taken before and after the major redecoration of the sanctuary.  Further photographs, with a detailed description of the work, will be the subject of forthcoming posts.

Posted by The Saint Bede Studio at 4:42 pm

Restoration of a Landmark Sydney Church : 3
The Old Church of S' Thomas (1851)

Lewisham's first Catholic church was built when the city of Sydney was less than 65 years old.  In 1851, when this church was commenced, Lewisham was known as Canterbury and was a village some seven kilometres south-west of the centre of Sydney. It is thought that this early church was given its name because of the village where it was built, but hallowed by the name of the great English mediaeval martyr, Saint Thomas Becket, who was murdered in his own Cathedral of Canterbury in 1170.  Subsequently, the district Canterbury became known as Petersham and Lewisham, all English names.

The old church was designated Saint Thomas of Canterbury when its foundation stone was laid in 1851 by the coadjutor bishop of Sydney, the Right Rev'd Charles Henry Davis OSB.  Thus far, research has failed to reveal the name of the local architect and builder of Saint Thomas' church, but it is reasonable to assume that the design was derived from plans prepared for the use of the Catholic Archbishop of Sydney either by Augustus Welby Northmore Pugin or by Charles Hansom, the renowned Gothic Revival English architects.

The laying of the foundation stone in May, 1851, was reported in the Sydney Catholic newspaper The Freeman's Journal :

On Monday last, the first stone of a new Church at Petersham was blessed by the Right Rev. the Bishop Coadjutor, assisted by the Clergy and Choir of the Cathedral. The Church is to be dedicated under the invocation of St. Thomas of Canterbury. It will be of simple but strictly correct architecture in the Early English style, with nave, chancel, sacristy, and, we believe, a tower, and spire.

The old church was not very large, but fine in its proportions and charming in its appearance.  All its Gothic detailing was "correct" and well built.  It comprised a nave and separate chancel, both made from stone, and roofed with slate.  It had an entrance porch on the northern side of its nave, in the usual position for small churches of this design.  A two-room sacristy with pitched-roofs projected from the southern wall of the chancel.  Evidently one of these rooms was also intended to provide accommodation for the resident or visiting priest.  No details have been uncovered of the appearance of the church's interior, but it is certain that the nave ceiling would have been of open-timber work, as all the pioneering Sydney churches were.

Although there is a reference in The Freeman's Journal report of the church having a tower and spire, these were not part of the completed building.  But the distinctive feature of the old church was a twin-gabled bellcote over the western facade.  Bellcotes were not an uncommon feature of nineteenth Australian churches, but very few had the twin-arrangement.  Two bells were hung in this bellcote.

Old Saint Thomas' did service as the parish church for only 37 years before it was replaced by a larger stone church built a very little distance away.  In those intervening years, however, a very large graveyard grew around the church containing the remains of around 4000 pioneering Catholics.  Australia's first Catholic bishop, John Bede Polding OSB, was laid to rest in this cemetery in 1877.  Many other pioneering Benedictine monks and secular priests were also buried in that ground, some of whom remain buried in the precinct.


Over the intervening years, all but a handful of those gravestones have disappeared, along with the handsome structure of Old Saint Thomas'.  When it was demolished in 1939, its stonework was re-used to make substantial fences around the church ground which are everywhere in evidence today.

Today is the Feast of the great English mediaeval bishop, Thomas Becket, who was martyred for his defence of the Church in 1170 within his own Cathedral of Canterbury by knights of King Henry II.

To commemorate this Feast, we wish to continue our description of restoration work on a church in Sydney (Australia) which is under the patronage of Saint Thomas.  The church of Saint Thomas of Canterbury (also known as Saint Thomas Becket's) was erected in 1887 in the Sydney suburb of Lewisham. Because of its proximity to the railway line which runs into the centre of Sydney from the North, the splendid Gothic Revival tower of the church is seen by thousands of people each day as they pass by in the city's trains.

Earlier this year, the Saint Bede Studio was approached to be a consultant on the restoration of the interior of this church.  Walking into Saint Thomas' for the first time on Easter Monday 2017, the impression was of an Old Lady of great dignity, largely intact, but of greatly faded glory, cluttered by successive generations of alterations and accretions. It was a great challenge to devise a near-complete interior re-ornamentation within the constraints of available time.

The Studio's commission was to devise a colour scheme for the repainting of the church, to devise an ornamental scheme for the Chancel and its adjacent chapels and to advise on heritage restoration generally.  In this work, we received much practical support from the pastor, Father Samuel Lynch,  parish assistant Mr Stephen Smith and artisans Mulholland Restoration and Decorating of Melbourne.


On this blog, we will be presenting a series of posts detailing the philosophy underpinning the Studio's work at Saint Thomas' as well as the stages of the buildings development and restoration.

For today, however, just a few photographs of the interior work, as an appetiser.  The quatrefoil shewn in Figure 1 was designed by the Studio as part of the ornament of the East wall of the chancel of Saint Thomas.  It is a stylised rendering of the initials  STB  Saint Thomas Becket, the  T  being rendered as a sword in order to depict the manner of Saint Thomas' martrydom.

Posted by The Saint Bede Studio at 4:06 pm

Restoration of a Landmark Sydney Church

Earlier this year, the Saint Bede Studio was approached to be a consultant on the restoration of the interior of a famous church in Sydney NSW.

The church of Saint Thomas of Canterbury (also known as Saint Thomas Becket's) was founded in 1887 in the Sydney suburb of Lewisham. Because of its proximity to the railway line which runs into the centre of Sydney from the North, the splendid Gothic Revival tower of the church is seen by thousands of people each day as they pass by in the city's trains.

This Blog is subsidiary to the Saint Bede Studio and presents another facet of our work and ongoing study. The purpose of this blog is to provide materials helpful to those re-ordering our Churches or building new ones.
Observations on Catholic architecture (particularly as it pertains to the Sacred Liturgy and its aesthetics) will be presented here. Restoration and re-ordering work of our churches will also be discussed, in addition to newly-built churches.
Although the focus will be on illustration by means of available photographs, we will also provide articles and links to articles helpful to those designing and ornamenting churches and their furnishings.
Lastly, some of the Saint Bede Studio's own work in this field will be presented for the interest of readers.
Please visit us regularly.